You are here: start » gameworld 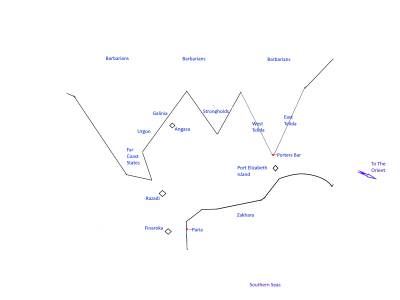 I know the map is a bit basic - all straight lines, black & white and labels. BUT - it helps me visualise where things are. One day I might get around to drawing a proper map - but maybe, I won't. You can, of course, double click it for a slightly larger version, in which case you might even be able to read the labels ….

At the top is the classic mountains inhabited by Barbarians which, in this case, includes all sorts of humanoid tribes. Across the middle is the Hann Empire, made up of the various game settings that I have designed over the years. Most of them have been part of the setting for games that I have run. A couple have arisen from world building exercises, either as part of a team with other people, or just to keep me amused. To the south is Zakhara, which is a TSR setting I used for a game years ago. It overflowed into the Far Coast game setting, so it needed to stay. Further south are the Southern Seas, which are part of the Zakharan setting. Off to the east it is jungles and then the Orient, which is relevant to the history of Porters Bar.

Cosmology - the Natural Philosophy that underpins the world and the Pantheons that support it.

History of the Region

Religion across the Empire

Regions of the Empire