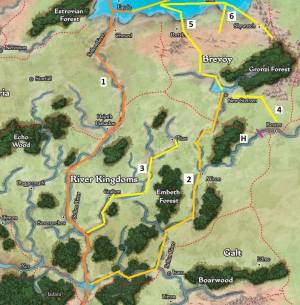 There are a number of Trade Routes that impact on this area. The map is large scale and does not show national borders particularly well, although the most significant countries and cities are marked. The large H represents Midmarch, while the purple line across the river between Midmarch and Restov represents a pair of waterfalls that stop river traffic.

(Main Trade Route) stretches all the way from the Inner Sea to the Lake of Mists and Veils and enables trade over a thousand (or so) miles. At the top secondary trade routes heads across to serve settlements, Cities, Towns and beyond. No one dominates this trade route, although the Surtova control access between The Sellen and the Great North Road that serves many of Brevoy's major houses. However, the Lodkova have a presence here as well.

(Secondary Trade Route) connects the metropolis of New Stetven to Mivon and onto the primary trade route of the River Sellen. The Lebeda and various Mivonese traders are the primary merchants working along this trade route, although the Surtova are trying to get involved as well..

(Local Trade Route) Connects Pitax and Gralton to the rest of the world, and is dominated by Merchant Houses from Pitax.

(Local Trade Route) connects Restov to New Stetven with spurs for Brundeston, The Rostland Plains and House Khavortorov. Overland caravans are slower than river travel, and all trade has to pay taxes in New Stetven, so it is not a very prosperous route for traders. No one house or group dominate it.

5) (Local Trade Route) The Great North Road connects Lake of Mists and Veils and Lake Reykal - It is approximately 150 miles in length, connects Port Ice to Silverhall and enables trade between Port Ice and New Steven. It incorporates side routes out to The Garess of Greyhaven and The Orlovsky, connects Brevoy's two main external trade routes - the Lake of Mists and Veils and The East Sellen River - and is probably Brevoy's most important Local Trade Route. The Northern end of the route passes through land controlled by House Surtova and finishes in their principle stronghold of Port Ice. The southern section of the route terminates at a small town (opposite Silverhall) controlled by House Lebeda. In between there are many independent holding (mainly fortified villages) that provide safe haven and rest stops for trade caravans. While many of these 'independent' lordlings have links to major noble families, they are not actually a part of the family. There are, however, a few villages completely free of any tie to a larger house. The road, and the strip next to it, it are considered 'safe', although there is wilderness beyond that.

Smallhurst: A typical settlement of the Great North Road

A fortified Village set on a low hill next to The Great North Road. The Local Lord ( Thomas Rowle, Master of Smallhurst) lives in a well-fortified keep, that has a village built inside its palisaded bailey. The village itself has a large ‘village square’ surrounded by tenement blocks, a chapel, a tavern and a general shop.

The walls and keep are well maintained, although the other buildings are all a bit rundown, dilapidated and could do with a coat of paint. The Village Guard, garrisoned in the Keep, provide an overnight watch, so caravan masters can stand most of their crew down while they are in the village.

(Local Trade Route) Combines overland and water-borne trade rout that links Orlovsky, Medveyed, Skywatch and the Lodkova to the wider world. It is dominated by the Lodkova although the Surtova have a presence here as well. This always saw less trade that the Great North Road, and is even less influential now that the city of Skywatch has closed its doors to the outside world. While little used the road continues along between the Gronzi Forest and Icerime Mountains until it reaches the eastern edge of the Rostland Plains and Restov. However, this lower section of the route is mountainous and more suited to mule than wagons.

It is said these four houses ruled Pitax in the old days - and they still form a large part of the council.