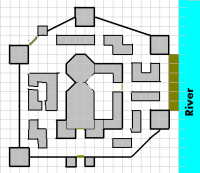 This town (pop: 1450), consists primarily of gnomes, stands within a recently claimed section of the River Kingdoms east of Mivon on a small tributary to the Little Sellen River. Jovvox was originally built around a remote monastery with a great open forge on the ground floor. After a turnover in local leadership, the monks rebelled and were killed. A flattering gnome merchant, Jov, persuaded the victor to cede her the territory in exchange for making weapons to fuel his rise to power. The bandit king was dead within nine months, but the gnome weaponsmith lived on.

Today, Jovvox is composed of a mix of Gnomes, humans, and halflings who have escaped slavery in the south – and this small enclave of weapon-smiths makes cheap weapons fast. When a bandit king or revolutionary from nearby Galt needs a hundred spears to arm a coup attempt, the weapon merchants of Jovvox supply them. The gnome smiths can make high-quality weapons, but most of their business comes from undercutting the competition in price and quality. “A true warrior only needs his sword once” is a popular sales pitch in Jovvox. Strangely, the town flies coloured ribbons, flags and banners from each of its towers - making a splash of bright colour in the middle of the green countryside.

There is a small iron mine near the town, although, the halfling and humans of Jovvox also scour the battlefields of the River Kingdoms, scavenging leftovers of past battles to recycle into new weapons. The gnomes will melt down any weapons found and forge the metal into new weapons for the next client, and it’s not uncommon for a smith making a big sale to send a scout after the buyer to watch and potentially reclaim any unused or broken weapons after the client’s destruction.

Politics and Law are open and strange - everything is decided at the court house.

While Kellywells is the defacto Leader and makes many of the decisions - Jovvox is, in a way, a semi-democracy. Any resident of the town can go to the courthouse and debate political decisions, legal cases or any other Town wide decision. Of course, some people are more influential than others, and many people can't be bothered to turn up. Quite often decisions made by Kellywells are implemented in a way that he didn't expect. The Court House meeting have the authority to remove Kellywells as leader and replace him with someone else, if ever he starts making unpopular decisions. It leads to a relatively stable - but somewhat unpredictable form of government.

There are three Hamlets scattered around the area, that look to Jovvox for leadership - although one of them isn't quite what you would expect.

Except where otherwise noted, content on this wiki is licensed under the following license: CC Attribution-Noncommercial 4.0 International