This image is typical for a fortified Villa

This is a Mansion reskinned as a Caster's Tower House. It is a slightly modified version of a tower that I used for a sage who had an interest in the natural world. It iusn't set up as a business, but allows the caster to carry out their research and create occasional items. 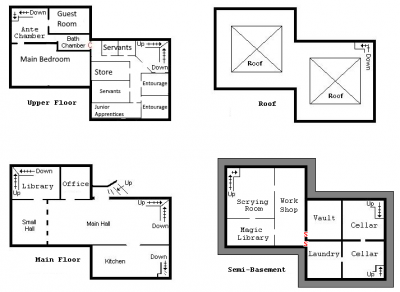 This floor plan (along with a few ancillary buildings) could represent a Noble Estate reskinned as a Great Caster's Tower. It has a huge area dedicated to research and personal magic projects - but isn't set up for production of Magic Items on a commercial scale.