Mivon is a swampy, boggy River Kingdom, to the south of Midmarch, that is reached by travelling down steam on the Little Sellen river. It is home to the Aldori Houses in Exile.

Mivon is mainly composed of swamps and bogs, and there is very little good building land. The swamps, bogs and streams are crisscrossed with trails and small bridges, which means the residents can get about on foot - although many prefer Skiffs, Canoes or Coracles. Spread along the river and surrounding the city, you will find a number of fortified hill top compounds - these are strongholds, and safe havens, for the Aldori houses that 'own' Mivon. The strongholds of the most influential families are the size of a small town - although most are smaller. 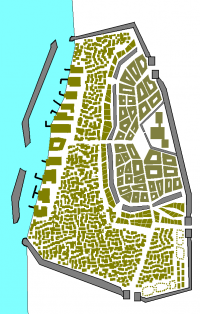 The Low Quarter (Docks) is filled with a jumble of warehouses, huts, cabins, animal pens, granaries, flop houses, ale houses, brothels, gambling dens and drug parlours. It is over run by gangs, thugs, drunken sailors, river pirates and the rest of the low life one finds in a city. The quayside is littered with fishing nets, small boats and river barges ready to trade up and down the river. The only place of interest here is the offices of the Mivon River Masters – a trade association for independent ship’s masters.

The Central Quarter (set on one side of the city) is on higher ground and has much drier roads! It is home to the Central Square which serves as both a market area and hosts the Sevier, a weekly gathering for swordsmen and swordswomen who wish to prove themselves in public. Here you will also find the Council Hall, home and office to the Mayor (Raston Selline) and his administration. Much of the rest of the area is taken up by the well protected courtyard villas that are the city residences for the Aldori families. There are a couple of well established (but fairly expensive) Inns, a trader in magical items (Anada Yarki) and a well respected merchant house (Vysult Shipping). House Yitis-Aldori, which is renowned for its fleet of small and exceedingly well protected river vessels, trades from its compound in Central Quarter.

The Market, to the south east of the city, is on slightly higher ground than the low quarter, and provides a safe-ish haven for the small farmers and fishers who come here to sell their wares.

See This Page for more information about Mivon City.

Anada Yarki – female Elf trader in magical items. She can make (or at least get made) other item for a fee. She can also get most things that cost 4000gp or less in a couple of days. After that it will have to be delivered. She lives in a well defended courtyard-style villa just off Central Square in Mivon.

The Merchant League - a formal group of Mivon's wealthiest independent Merchants and Ship Owners. They carry general trade as well as working for the Aldori houses. They have a large office on the dockside and, like many in the River kingdoms, they follow the River Freedoms enthusiastically.

Vysult Shipping - A family owned merchant fleet controlled by Adlash Vysulty from a small compound close to Central Square. The Vysulty are one of the few influential families without an Aldori association.

Mivon River Masters - a loose amalgam of freelance ship’s captains and masters lead by Tokim Almat, although some say they are little better than river pirates. They have offices in the Low Quarter.

House Yitis - technically one of the minor Aldori houses - Catia Yitis-Aldori runs a small, but ambitious, shipping line. They specialise in really high value cargoes with heavy security and can deliver a small marine fighting force just about anywhere.

The Houses in Exile

These are the Aldori houses that left Rostland after the conquest by Choral the Conqueror. None were directly related to the Sword Baron's line. The major houses have always been most influential politically, and most of the smaller houses have allied themselves to one or the other of them, although few houses try to stay independent. They are listed in order of their influence.